Posted by Below The Surface at 6:14 PM No comments:

Design a conservation project or presentation to inform others about what you have learned over the last three months.  Consider the importance of getting other people involved and why it is critical to raise awareness.

Challenge:  Write a letter to the editor (any editor), as to what role people should play in addressing water pollution in your community.

Posted by Below The Surface at 10:05 AM No comments:

Challenge:  Who is Rachel Carson?  Volunteer and become a trained to monitor water.

Extra Challenge:  Are you registered to vote?  Why is this important?

Posted by Below The Surface at 10:04 AM No comments:

Posted by Below The Surface at 8:12 AM No comments:

The 90 Day Plan - Day 86 Register or Adopt Your Watershed

Using the link below, REGISTER (or adopt) YOUR WATERSHED and take some level of personal responsibility for keeping it healthy.

Challenge:  Where does your watershed begin?  How far does it extend?  What are current concerns facing your watershed?  What solutions, if any, are being implemented to correct any damage done?  Organize a clean-up effort for your local waterway.

Posted by Below The Surface at 8:11 AM No comments:

Unsubscribe from this newsletter

Posted by Below The Surface at 8:09 AM No comments:

What you don’t know can hurt you and the environment.  Awareness is a critical component of conservation; whether it is keeping other people up to speed or yourself, STAY INFORMED and make your own decisions.  Knowledge is power.  What are sentinels or “what is the canary in the coal mine?”  What can indicator species tell us about our actions as humans?

Challenge:   Research some environmental and/or conservation organizations, do you like any?  Subscribe to their online newsletter.   What does Surfrider’s State of the Beach Report say about your favorite beach?  Use this link to find out: http://www.surfrider.org/stateofthebeach/home.asp

Posted by Below The Surface at 9:08 AM No comments:

Posted by Below The Surface at 8:52 AM No comments: 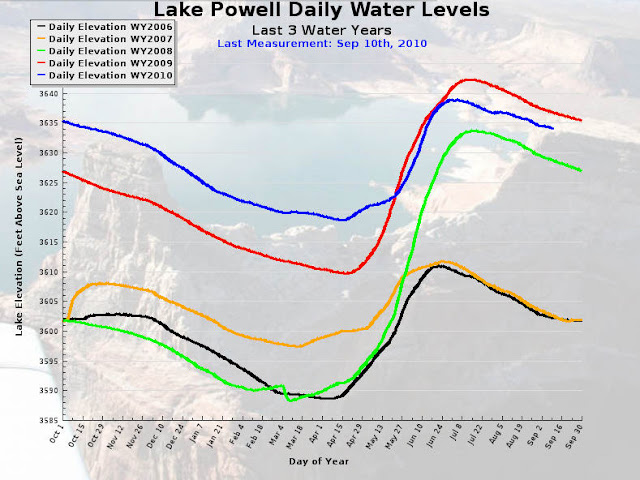 Yesterday we reported on Lake Mead and its dangerously low water levels possibly preventing its ability to generate power in the near future.  Upstream, Lake Powell has sustained an increased level (by about 30 ft.) over past 3 years.  Is the Lake Mead crisis partially due to interstate water rivalries?

The dam at Lake Powell restricts the flow to Lake Mead and the border of Lake Powell is shared by Arizona and Utah.  Meanwhile, Lake Mead shares borders with Nevada and Arizona, but distributes its water to California as well.

Without assessing the absolute acre/ft retained by Lake Powell, it would be a calculation beyond simple mathematics due to shape size, depth, bathymetry, etc... does it make sense that these two areas are not playing nice?  Is Lake Powell restraining more than its fair share?
﻿
Posted by Below The Surface at 9:21 AM No comments:

THINK GLOBALLY, ACT LOCALLY!  Consider the planet and how your actions are part of a much bigger picture.  Continue to make a difference in your world; you never know how big your ripple will grow.  We’re in this together.

Challenge:  Investigate the term: ‘Water Rights.’  Who can rightly claim water?  What is your prediction for ‘Water Rights’ disputes in the future?   How does watershed management fit into thinking globally and acting locally?

Posted by Below The Surface at 8:56 AM No comments:

Consider one or two things you would like to see improve in your world and GET INVOLVED.  Even as individuals, it all adds up and there is no limit to the difference we can make.

Challenge:  Don’t waste time doing anything other than following your passions.  The following link will show you how BIG of a RIPPLE one person can have: www.livinglandsandwaters.org

Posted by Below The Surface at 7:54 AM No comments:

Humans are an inter-tidal species.  Become an ADVOCATE for MARINE PROTECTED AREAS, MPAs.  These areas increase the survival potential and population density for marine life by giving them a sanctuary to feed and reproduce.

Challenge:  What is America’s Exclusive Economic Zone?  How large is it compared to our land?  What is the total square mileage for our National Parks vs. MPAs?  What are three substantial threats to fish populations and how can more MPAs help to prevent a bad situation from getting worse?

Posted by Below The Surface at 7:53 AM No comments:

PLAN an EXPEDITION to explore an environmental issue anywhere in the world.  Someday, make this plan a reality.

Challenge:  What are some significant discoveries explorers have made that helped to shape your world today?

Posted by Below The Surface at 7:52 AM No comments: 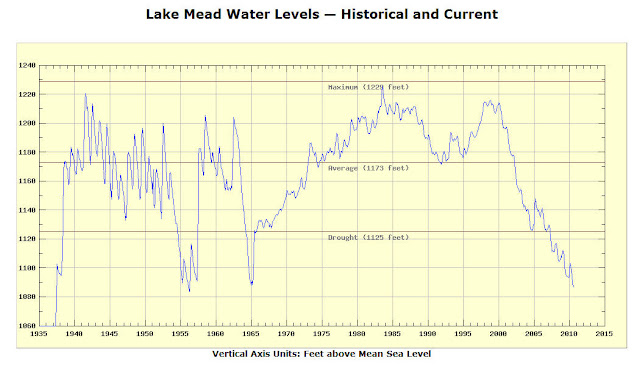 
Posted by Below The Surface at 9:39 PM No comments:

After 75 years of steadily cranking out electricity for California, Arizona and Nevada, the mighty turbines of the Hoover Dam could cease turning as soon as 2013, if water levels in the lake that feeds the dam don't start to recover, say water and dam experts.

Under pressure from the region's growing population and years of drought, Lake Mead was down to 1,087 feet, a 54-year low, as of Wednesday.

If the lake loses 10 feet a year, as it has recently, it will soon reach 1,050 feet, the level below which the turbines can no longer run.

Without that power, Metropolitan's costs to transport water will double or even triple, a district executive said.

That could result in a $10 to $20 a month increase in annual costs for residential customers, but could have greater impacts on business customers who use more water.

Federal and state water managers have been working to stave off that day, and two scientists from the Scripps Institution of Oceanography in La Jolla who study Lake Mead believe that managers will never allow levels to get below 1,050 feet.

But Pat Mulroy, who runs the Las Vegas Valley Water District and the Southern Nevada Water Authority, said she has to worry about the worst-case scenario.

One of two intake pipes that pump water to Las Vegas is at that same 1,050-foot level.

"We're teetering on the first shortage right now," Mulroy said. "How quickly Mead goes down depends on which hydrology you look at; the Bureau (of Reclamation, which runs the dam) bases it on probability. But the whole probability analysis, because of climate change, has been thrown out the window. We’re experiencing anomaly after anomaly."

The decrease in water already experienced at Lake Mead has reduced output from the turbines from 130 megawatts of peak capacity to 100, according to Peter DiDonato, who runs the Hoover Dam's hydroelectric generators.

Each megawatt could power 650 homes.

That's because at lower water pressure, air bubbles flow through with the water, causing the turbines to lose efficiency.

"It was designed as a high-elevation dam," DiDonato said.

The bureau is preparing for reduced elevations by testing a different type of turbine starting in 2012, one that can handle levels down to 1,000 feet, he said.

DiDonato is concerned about falling levels, but not too concerned. The government's 24-month forecast shows lake levels returning to 1,100 feet next year.

"The drought can't last forever," DiDonato said. "Eventually, the lake is going to fill up again. You have to hope it does."

Actually, the drought may not be a short-term emergency so much as a feature of a new, drier American West.

"To blame this on a drought that’s going to be over next year or something, that’s not correct," said Tim Barnett, a marine physicist at the Scripps Intuition of Oceanography in La Jolla. "This looks like the first harbingers of man's impact on the climate."

In a 2009 paper in the Proceedings of the National Academy of Sciences, the pair calculated a 50 percent chance that by 2025, users would not receive their full request of water from the Colorado River.

That would create water problems for Arizona, Nevada, California and Mexico (which is at the end of the river), in addition to the lost megawatts from lower efficiency in the hydroelectric turbines.

Pierce recalculated their figures to determine the effects of increased demand from development and of climate change.

He determined that with no change in water management policy, there was a 20 percent chance that the turbines would have to shut off in 2025.

The 20th century was the wettest in a millennium for the American West, based on research using tree rings.

If a reversion to historical water levels combines with climate change and continued increases in demand, there's a 20 percent chance that Lake Mead will fall below 1,050 feet next year, Pierce said in an interview.

But Pierce and Barnett don't think the government will allow that to happen.

Federal water managers can release more water from upriver Lake Powell, although no water was released this year.

And they can refuse to grant water requests in full, something that's never happened before, Pierce said.

Losing power from the Hoover Dam would raise expenses for Metropolitan and for Southern California Edison, both of which buy power for the dam at low rates. Edison has already begun preparations for lower power generation from the dam, which represents 0.3 percent of its portfolio, said Gil Alexander, a spokesman for the utility.

Without power from the dam, Metropolitan would turn to the spot electricity market and pay double or triple the cost, depending on how much less power the dam is producing.

When Lake Mead falls to 1,075 feet, an austerity plan kicks in that reduces water deliveries by 10 percent.

Metropolitan and the Southern Nevada Water Authority are storing excess water from other sources in Lake Mead, and the Mexican government is in negotiations to do the same thing.

Metropolitan initiated a new energy policy last month that includes more efficiency and construction of 10 megawatts of solar panels, to offset loss of power from the dam.

Still, Barnett and Pierce are worried.

"It would be very foolish to think this is a short-term aberration due to a drought of three, four, five or even 10 years," Barnett said. "It's a resource that’s fully utilized. You can't get any more out of it. And nobody's talking about curtailing development."

Posted by Below The Surface at 9:07 PM No comments: