Romulus Whitaker: The real danger lurking in the water | Video on TED.com

Romulus Whitaker: The real danger lurking in the water Video on TED.com
Posted by Below The Surface at 11:21 AM No comments:

A Ban or a Wrecking Ball?

A recent ban on Red Snapper fishing (and other fish species) in the Southeastern Atlantic has raised myriad questions about the future of the fishing industry on the East Coast.  While the ban is only for six months, this calls in to question a few issues.  As pointed out in the article below, there is an impact on the recreational and sport fishing industries and the livelihood of the people who rely on it.  Bigger questions might include the methodology of how a census of fish populations is taken and is if it possible for real time observations of a dwindling population. 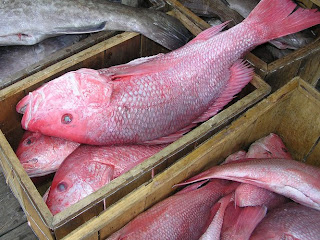 To believe it sound science to visually quantify the impact of a decreased population is a bit of a stretch, almost as much of a stretch as to believe that populations traveling throughout the ocean - nearly 50% of the territory of the United States is under water - can be accurately measured by looking at a cross section in any given area.  Most species of Red Snapper travel in large schools at great depths.

Is population dwinding or are human systems of measurement - be they colloquial or scientific - not keeping up with natures migratory systems?

Posted by Below The Surface at 2:39 PM No comments:

Posted by Below The Surface at 5:32 PM No comments: