Posted by Below The Surface at 6:00 PM No comments:

Planning and Conservation League from Insider.com

As part of the QSA, the State of California made an open-ended commitment to pay for mitigating impacts to the Salton Sea. Judge Candee's tentative ruling holds that it was unconstitutional to commit future state budgets to these undefined costs.

This legal ruling has implications for future transfers of Colorado River water as well as other large-scale water management decisions, such as the still-under-development Bay Delta Conservation Plan.

Here are a few take-aways from Judge Candee's order:

Environmental and public health commitments cannot be put off until a later date. (There's a real danger that the Bay Delta Conservation Plan process is repeating this fatal error.)

California must reduce its dependence on water imported from distant and unreliable sources. While transfers from within the same water basin will continue at some level, we need to move to a reliable future based on greater development of local water supplies that are not at risk of legal challenges, environmental conflicts, and climate change impacts.

Local interests, whether in the Imperial and Coachella Valleys or in the Bay Delta must be made full partners to develop sustainable water management solutions.

Posted by Below The Surface at 3:00 PM No comments:

Posted by Below The Surface at 2:59 PM No comments:

The California Coastal Commission on Dec. 10 voted to dismiss a request to revoke the Carlsbad Desalination Project’s Coastal Development Permit. The commission originally approved the permit in November 2007, and construction started last month.

The project is being built by Poseidon Resources in partnership with the City of Carlsbad. When completed, the desalination plant will have the capacity to produce 50 million gallons per day of high quality drinking water and serve 300,000 residents annually. It is expected to be operational in 2012.

Huntington Beach, Anaheim, Santa Ana, Seal Beach and the Metropolitan Water District, among others, have said they are interested in buying water from Poseidon.

Posted by Below The Surface at 9:07 PM No comments:

Put People to Work on Water: Vote Coming Up in Hours

We all know that the economic crisis has cost millions of people their jobs. And, while economists say the stimulus helped a little, it didn't go far enough. We also know that our water infrastructure is crumbling. Many of the pipes carrying our wastewater and drinking water are 60 years old or more. We lose 1.7 trillion gallons of water a year because of faulty infrastructure.

Today, we have a chance to do something about both. In a few hours the House of Representatives will vote on the Jobs for Main Street Act.

This bill will provide $2 billion for wastewater and drinking water infrastructure repairs. That means about 50,000 people will be put to work repairing pipes and treatment works. Email your Representative now and ask them to vote for the Jobs for Main Street Act.

Don't want to receive further alerts from us? Go to: http://action.foodandwaterwatch.org/unsubscribe.jsp

Posted by Below The Surface at 11:48 AM No comments: 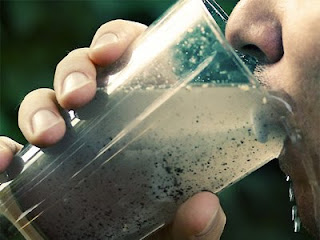 Nothing like a fresh, tasty glass of tap water.  Or maybe a fresh bottle of water... until we learn that much of the bottled water we purchase at highly inflated rates is nothing more spectacular than filtered tap water.  So much for images of wild mountains, springs and 10 point buck.

Regardless, the article below might give pause when we decide not to send a letter to our mayors, city council members, state or federal representatives demanding clean water and improved treatment processes.  Click the following for an assessment of "Whats in Your Water".  It may be time to write that letter, and I don't mean the one to Santa Claus.
Posted by Below The Surface at 9:13 AM No comments:

When planning for possible pesticide applications in an IPM program, review and complete this checklist to consider practices that minimize environmental and efficacy problems.

·         Choose a pesticide from the UC IPM Pest Management Guidelines for the target pest considering:

o    Chemical mode of action (based on efficacy, spectrum of activity, and pesticide resistance). Select an alternative chemical or nonchemical treatment when resistance risk is high.

·         Select an alternative chemical or nonchemical treatment when risk is high.

o    After an application is made, record application date, product used, rate, and location of application. Follow up to confirm that treatment was effective.

When possible, choose pesticides that are not in emulsifiable concentrate (EC) form which release volatile organic compounds (VOCs). VOCs react with sunlight to form ozone, a major air pollutant.

Posted by Below The Surface at 9:05 PM No comments:

Posted by Below The Surface at 8:31 PM No comments:

Posted by Below The Surface at 8:29 PM No comments:

Posted by Below The Surface at 8:25 PM No comments: