Posted by Below The Surface at 11:05 PM No comments:

Posted by Below The Surface at 11:03 PM No comments:

MEDIA ADVISORY--BTS INVITES YOU TO CLEAN-UP BUTLER LAKE IN LIBERTYVILLE, IL ON 4/24

FOR IMMEDIATE RELEASE 22 March 2010 CONTACT Kristian Gustavson, Below the Surface, Founder & Expedition Leader—p: 760.277.3503 e: kristian@belowthesurface.org Anne Veselack, Below the Surface, Chicagoland Coordinator—p.847.918.9738 e: anne@belowthesurface.org ______________________________________________________________________
Below the Surface Partners with IL EPA & Lake County Stormwater Management Commission for a clean-up @ Butler Lake in
Libertyville
~Acting Locally & Thinking Globally is the Theme for This Earth Day Event~
Libertyville, IL – On April 24th 2010, beginning at 10:00 AM at the Butler Lake Fishing Pier—Below the Surface (BTS) will launch their second annual clean-up at Butler Lake in Libertyville, IL. The IL EPA is helping to fund this effort through a SCALE grant (Streambank Clean-up And Lakeshore Enhancement).
Attendees are encouraged to bring their own gloves, boots, and grubby clothes. Bags and other clean-up gear will be provided from the Lake County Stormwater Management Commission. This event is part Earth Day celebration and part homecoming for BTS Founder & Exploration Team Leader Kristian Gustavson. It will be held RAIN OR SHINE. Participants are also welcome to bring canoes & rowboats to assist with the effort.
This clean-up effort will direct volunteers to the littered areas above and below the lake as it is part of the Bull Creek Watershed. Improvements in the watershed will help keep litter out of the Des Plaines River, Illinois and Mississippi Rivers, and ultimately the ocean. Last year's effort is detailed in a report from BTS and available upon request.
Kristian Gustavson's anticipated return to his hometown is following his successful expedition on the Atchafalaya River. This exploration of America's Waterways was covered by a writer and photographer from Reader's Digest; the article is due to be published in June. Discoveries from the expedition will serve to set a precedent for future restoration efforts on the Gulf Coast. The team was also joined by legendary river guide John Ruskey from the Quapaw Canoe Company, two biologists from The National Audubon Society, Pro- Surfer & Eco-Warrior Surfer James Pribram, and numerous local stakeholders. This collaborative effort is an encouraging sign for the type of cooperation needed for enhanced conservation upstream and down.
Posted by Below The Surface at 10:53 AM No comments:

Posted by Below The Surface at 9:22 AM No comments: 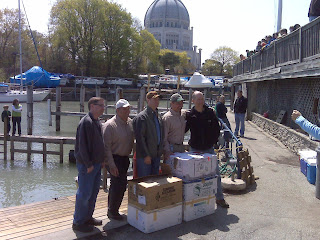 Trout Unlimited release
Sent on the Sprint® Now Network from my BlackBerry®
Posted by Below The Surface at 9:28 PM No comments:

Pledges to Lead in Congress to Keep the Great Lakes Clean

According to a recent Alliance for the Great Lakes report, 413 million gallons of combined storm water and sewage were sent through the locks into Lake Michigan in 2009.  More than 11 billion gallons were released into the Lake in 2008.  Thirteen percent of Great Lakes beach samples violated public health standards for safe swimming in 2008 due to high E. coli levels – more than twice the national average.

"When elected to Congress I will be a leader working to keep the Great Lakes – our crown jewel of the Midwest – clean and safe," said Dold.  "More than 30 million people use the Great Lakes for recreational purposes and drinking water each year.  I will ensure that we can continue to enjoy the benefits of this area's most treasured natural resource."

Dold proposed increasing the fines for dumping sewage into the lake.  The money would then go into a fund to help clean and monitor the health of the Great Lakes.

Dold spent the morning celebrating Earth Day by cleaning up the nearby beach with volunteers.  Dold also later visited with Central Elementary School students from Wilmette while they released trout into Lake Michigan to help combat the declining trout population.

Posted by Below The Surface at 9:26 PM No comments:

The True Cost of Energy

In a brief response to the horrific oil rig explosion off the coast of Louisiana, I would like to point out some signs that speak to the human cost of oil drilling & coal mining.
1). Quoting the article, " The blast could prove to be one of the deadliest U.S. offshore drilling accidents of the past half-century."
2). April has also seen the worst coal mining disaster in the last fifty-years with the mine collapse in West Virginia.
3). As our country and our planet become more desperate to use these non-renewable resources, occurrences such as these will become more commonplace.
My thoughts & prayers go out for the victims & the families.  At Below the Surface, we seek renewable energy as a solution (solar, biofuels, wind, etc).  These are safer solutions that do not endanger humans or the planet as much as oil and/or coal.  Be safe, Be the Solution!

BELOW THE SURFACE, Founder
A coast-to-coast exploration of America's waterways

Posted by Below The Surface at 8:32 PM No comments:

Rescuers in helicopters and boats searched the Gulf of Mexico for 11 missing oil workers Wednesday after a thunderous explosion at a huge drilling platform that lit up the night sky with a pillar of flame.

Seventeen people were injured, four critically, in the blast Tuesday night aboard the Deepwater Horizon rig 80 kilometres off the Louisiana coast.

The blast could prove to be one of the deadliest U.S. offshore drilling accidents of the past half-century.

The U.S. coast guard held out hope that the missing workers escaped in one of the platform's covered lifeboats.

Nearly 24 hours after the explosion, the roughly 120-by-75-metre rig continued to burn, and authorities could not say when the flames might die out. A column of black smoke rose hundreds of metres over the Gulf of Mexico as fireboats shot streams of water at the blaze.

Adrian Rose, vice-president of rig owner Transocean Ltd., said the explosion appeared to be a blowout, in which natural gas or oil forces its way up a well pipe and smashes the equipment. But precisely what went wrong is still under investigation.

Crews were doing routine work before the explosion, and there were no signs of trouble, Rose said.

A total of 126 workers were aboard the rig when it blew up. The coast guard said 17 were taken by air or sea to hospitals, including four in critical condition. Others suffered burns, broken legs and smoke inhalation.

Nearly 100 other workers made it aboard a supply boat and were expected to reach the Louisiana shore by evening.

Kelly Eugene waited with nine family members for her husband, Kevin Eugene, 46, a cook on the Deepwater Horizon. A catering company operating on the rig notified her he was safe.

The rig was tilting as much as 10 degrees after the blast, but earlier fears that it might topple over appeared unfounded. Coast guard environmental teams were on standby, though officials said the damage to the environment appeared minimal so far.

The rig, which was under contract to the oil giant BP, was doing exploratory drilling but was not in production, Transocean spokesman Greg Panagos said. Among the people on board, 79 worked for Transocean, six for BP and 41 were contract workers.

According to Transocean's website, the Deepwater Horizon is about twice the size of a U.S. football field. Built in 2001 in South Korea, it is designed to operate in water up to 2,500 metres deep, drill nearly nine kilometres down and accommodate a crew of 130. It floats on pontoons and is moored to the sea floor by several large anchors.


Posted by Below The Surface at 8:18 PM No comments:

This is yet another story of "Clean Coal."

The Chinese coal ship that ran on to Australia's Great Barrier Reef last week has damaged a two-mile (three kilometer) stretch of the World Heritage Area that could take years to repair, the chairman of the Great Barrier Reef Marine Park Authority said Tuesday.

Chairman Russell Reichelt told CNN affiliate ABC News in Australia that toxic anti-fouling paint had been scraped off the Shen Neng 1 as it ran across the coral reef. The paint contains biocides that prevent barnacles and other marine organisms from attaching to the hulls of ships.

"The paint that's been scraped off onto the reef is killing corals in its vicinity or they're showing signs of almost immediate mortality from being close to the anti-fouling," Reichelt told ABC News.

Reichelt said repairing the damage left by the Shen Neng 1 will likely be largest operation ever undertaken on the reef, a World Heritage Area.

Australian authorities have said the coal carrier was more than 17 miles off course when it ran aground on Douglas Shoal on April 4. The ship was refloated Tuesday and towed to a safe anchorage off the reef.

The ship leaked some oil when it hit the reef, but authorities said dispersants used had kept damage from any oil slick to a minimum.

Posted by Below The Surface at 10:24 AM No comments: