Posted by Below The Surface at 10:51 AM No comments:

Drive Thru, Dine In, or To Go? 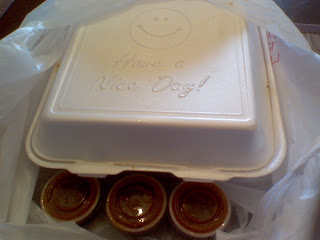 One lunch from drive-thru meal = 1 cfc free #5 styrofoam container, 1 plastic bag, and 3 plastic salsa containers... on-the-side is wasteful. to-go is wasteful. eat in or eat out. make up your mind.
Posted by Below The Surface at 1:44 PM No comments:

Posted by Below The Surface at 11:52 AM No comments:

Are you watching all this rain go down the drain?  Learn about different rain storage options, important steps to remember when implementing any water harvesting strategies and how to use your stored water at this hands-on workshop.   Brook Sarson, water harvesting professional, with H2OME (www.h2o-me.com), along with KC Montgomery, licensed and insured plumber, with Monty’s Plumbing (www.montysplumbing.com) will walk you through a 1000 gallon tank installation and a 750 gallon tank installation at a home in Scripps Ranch.

The class will start with a site introduction, followed by an hour presentation on rainwater harvesting strategies and considerations.  Then we will discuss the specifics of our site, our materials, and begin work to connect our gutter downspouts through filters to our rainwater tanks.

You should walk away from this workshop with enough information to either make an informed decision about what can be done at your site by Brook and KC, or you will know how to install your own water tanks, and have access to resources to help you complete your project.

Posted by Below The Surface at 11:36 AM No comments:

Posted by Below The Surface at 9:24 AM No comments:

Posted by Below The Surface at 3:04 PM No comments:

Many of the recommendations on water hardness emphasize the safety of hard water and also the studies that show better cardiovascular health with harder water, possibly due to calcium and magnesium dissolved in the hard water, instead of saturating the solution with sodium which is known to have all sorts of harmful effects.  I am not a physician, but after reading a few articles on the issue, this seems like a reasonable assessment of the situation.  For instance, please read the following excerpt:

“Mechanical water softening units can be permanently installed into the plumbing system to continuously remove calcium and magnesium.  Water softeners operate on the ion exchange process. In this process, water passes through a media bed, usually sulfonated polystyrene beads. The beads are supersaturated with sodium. The ion exchange process takes place as hard water passes through the softening material. The hardness minerals attach themselves to the resin beads while sodium on the resin beads is released simultaneously into the water. When the resin becomes saturated with calcium and magnesium, it must be recharged. The recharging is done by passing a salt (brine) solution through the resin. The sodium replaces the calcium and magnesium which are discharged in the waste water. Hard water treated with an ion exchange water softener has sodium added. According to the Water Quality Association (WQA), the ion exchange softening process adds sodium at the rate of about 8 mg/liter for each grain of hardness removed per gallon of water.

For example, if the water has a hardness of 10 grains per gallon (Hard), it will contain about 80 mg/liter of sodium after being softened in an ion exchange water softener if all hardness minerals are removed.

Because of the sodium content of softened water, some individuals may be advised by their physician, not to install water softeners, to soften only hot water or to bypass the water softener with a cold water line to provide unsoftened water for drinking and cooking; usually to a separate faucet at the kitchen sink.

Softened water is not recommended for watering plants, lawns, and gardens due to its sodium content.” http://www.water-research.net/hardness.htm#health

Ever notice that dead patch by your reverse osmosis outflow pipe where the system recharges and dumps that salt solution on the ground?

The WHO and Wikipedia articles emphasize the importance of the safety of hard water without fully addressing the deleterious effects of a diet with increased sodium content.  It is my understanding that soft water can dissolve heavy metals and increase sodium content in our diets, while a hard water supply purified by an activated charcoal filter will remove contaminants while retaining minerals that are beneficial to cardiovascular health.

The World Health Organization says that "there does not appear to be any convincing evidence that water hardness causes adverse health effects in humans."[7]

Some studies have shown a weak inverse relationship between water hardness and cardiovascular disease in men, up to a level of 170 mg calcium carbonate per litre of water. The World Health Organization has reviewed the evidence and concluded the data were inadequate to allow for a recommendation for a level of hardness.[7]

In a review by František Kožíšek, M.D., Ph.D. National Institute of Public Health, Czech Republic there is a good overview of the topic which, unlike the WHO, sets some recommendations for the maximum and minimum levels of calcium (40-80 ppm) and magnesium (20-30 ppm) in drinking water, and a total hardness expressed as the sum of the calcium and magnesium concentrations of 2-4 mmol/L.[8]

Other studies have shown weak correlations between cardiovascular health and water hardness.[9][10][11]

A UK nationwide study, funded by the Department of Health, is investigating anecdotal evidence that childhood eczema may by correlated with hard water.[12]

Very soft water can corrode the metal pipes in which it is carried and as a result the water may contain elevated levels of cadmium, copper, lead and zinc.[7]”

Posted by Below The Surface at 9:27 AM No comments:

Posted by Below The Surface at 9:27 AM No comments:

Desal and “Carbon”ated Water: Coastal Commission Should Make the Carlsbad Project Offset All of Its Carbon Impacts

Desal and "Carbon"ated Water: Coastal Commission Should Make the Carlsbad Project Offset All of Its Carbon Impacts

Posted by Below The Surface at 9:25 AM No comments:

Posted by Below The Surface at 4:44 PM No comments:

Posted by Below The Surface at 4:44 PM No comments:

1 inch of rain on 1000 sq. ft. of catchment yields 600 gallons of rainwater that you can use to irrigate plants during the drier months.

Posted by Below The Surface at 3:01 PM No comments:

Posted by Below The Surface at 9:32 AM No comments: