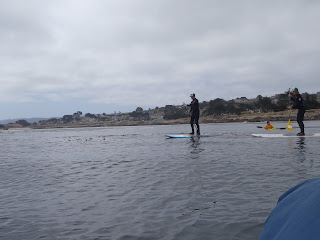 The series got off to a gradual start and ramped up as we moved up the coast. We started in La Jolla on June 5th, then moved north to Crystal Cove in Orange County and Point Dume. In La Jolla, we were a small part of the day's events as we joined up forced with SD Coastkeeper and 5 other organizations. Personally, i was out of town for a close friend's wedding, so it only ended up being Kristian and our friend Paul, and Jodie Nelson.

Crystal Cove was a calm day initially, where we met up with Whitney Graves and Ray Hiemstra in the morning and paddled with Jodie Nelson of the SUP Spot in the afternoon - into a headwind on the way back. We had a great followup day at Point Dume with Joe Geever, Sarah Sikich and Brian Meux. Jodie joined us again, this time with her 15 year old son Taylor. We paddled from Point Dume to Paradise Cove where Kristian, Jodie and Taylor chased a few waves and we all had a chance to poke around and enjoy the views and speak with local surfers about the marine protected area and their take on it. Along the way we saw plenty of jellyfish the size of a dinner plate!

Brian was a rockstar, meeting us with 2 reporters (one of whom helped chum the water, unfortunately not attracting any fish or other creatures... hopefully the feeling passed on her way in!). All in all, it was an awesome day and had us digging in to a phenomenal couple of weeks.

The subsequent weekend brought us to Naples Reef where we met up with Greg, Michael and Jenn. A friend of mine from Coastal CODE and his wife (who happen to live on a ranch across the street and a few miles north of El Capitan) joined us. Coincidentally enough, they are friends of Gregs, so it was a bit of a reunion! We had a great paddle out to Naples Reef where we met up with the Channelkeeper boat, a very enthusastic young freelancer, photographers and a film crew from the Cousteau foundation (I am embarassed to say I do not recall their names). We were graciously treated to a wonderful lunch, great conversation and plenty of snorkeling in the grasses along the kelp beds. We jumped off the boat and continued south to Haskell's beach. While we had a small after party planned, it was a bit of a flop, considering the only people that made it were Kristian, me and Greg. Nevertheless, we had fun and the bartenders invited a bunch of their friends so we could have a few beers and not feel like the only people who care about Marine Protected Areas! After sleeping for a few hours in the car, we made an early morning beeline for Monterey Bay.

After 4 hours of driving, we arrived at Cannery Row at 6 am, and slept a couple of hours in the parking lot by the fishing docks. We met up with Sarah, Steve Schimek, Sean of the Pelagic Shark Foundation, and a few other well respected scientists with a deep knowledge of kelp beds and the history of MPA's in Monterey Bay. It was an incredible day with plenty of sealife to enjoy (we paddled past the aquarium and were greeted by dozens of curious harbor seals, sea lions and sea otters interested to see who was bumbling through their backyard. 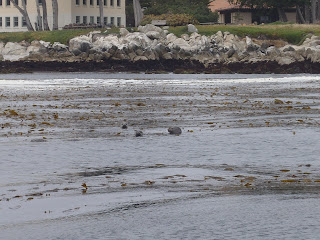 This past weekend, we made our way to Half Moon Bay in an all night burst of caffine and raw energy to paddle Maverick's with Bob Breen and Joao de Macedo of the Save the Waves Coaltion. This paddle - from Mavericks beach to Montara - was done in 5-7' seas at an 8 second interval. It was long and tiring, but we were greeted by an enthusiastic group of 50 some odd people who came out for a Hands Across the Sands gathering at Montara. Although 2 of the 3 of us almost got our clocks cleaned by the wild shore break there, we managed to safely land, enjoy the multitude of beautiful jellyfish that populate the area and a cold beer and watch the final few minutes of the US's heartbreaking loss after at the Half Moon Bay Brewing Co.

The real treat (and embodiment of the unknown potential our expeditions hold) was on Sunday. Joao joined us again up at Point Reyes, where we visited Pt Reyes Light, and we were joined by writer Steve Chapple, who wrote a feature article in the June Readers Digest about Kristian and an expedition we took down the Atchafalaya River. We traveled out to Pt Reyes light and to Drakes Estero in search of a place to put in. We were greeted with a sign warning of great penalties for disturbing harbor seal pupping from March 1 - June 30th, so we gave a pass on paddling in that location. We did, however, meet Kevin Lunny, the owner of the Drakes Bay Oyster Farm, who gave us an incredible education on the strength and necessity of oysters as a filter feeder. He offered up great ideas, and is an awesome resource for us to learn more about ecologically and economically balanced solutions to cleaning up our waterways. We'll be making a return trip to paddle Drakes Estero with him and learn more about his operation and efforts to create a zero waste business - between his oyster and cattle farm. He embodies sustainable agriculture, and is also embroiled in an incredible battle with the National Parks Service who forced him to sell his families land in the waters of that area, and are now attempting to pull his lease. We could write a documentary just about him!

We chose Tomales Bay for our paddle, and explored the grasslands and marsh areas as far as the skegs on our Stand Up Paddles would allow us to venture.

The beauty of these expeditions is the people we meet along the way. Characters like all of you, and Mark and Wendy - a couple that Steve is friends with who let us camp in the tall grasses in their home along Tomales Bay, and Kevin Lunny make it worth it - educational for us and inspiring to find and advocate for new solutions in our ongoing collective quest to protect our rivers and oceans. I have forwarded pictures to you, and at Michael Sheey's suggestion, will be working to put together a short video specifically for the Aug 4-5th DFG meeting that chronicles our journey and collective efforts.

Again, our heartfelt thanks for helping us set the foundation for a phenomenal new outreach tool to help engage people in your efforts and to take ownership for our most vital natural resources. 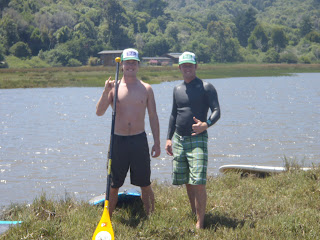