Algae Bloom Claims the Life of a Horse, Nearly its Master 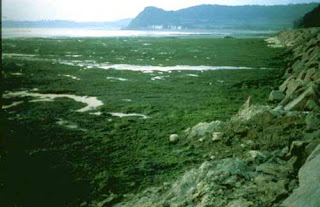 Hypoxic (or more commonly known as "Dead") Zones have become a plague along coastlines throughout the world. This phenomena has been well know to threaten the well being of marine ecosystems - indeed there are over 400 Hypoxic Zones throughout the world, often caused by nitrogen and phosphates contained in manure and other synthetic fertilizers. Below The Surface was started in response to the Hypoxic Zone in the Gulf of Mexico that has grown to 8000 square miles, or roughly the size of Massachusetts.

France has recently experienced a rash of deaths attributed to the key catalyst of Hypoxic Zones, Algae. Click Here for the full article.
Posted by Below The Surface at 11:22 PM